To create an image during the first step (disk selection) you will need to select the necessary volume or physical disk and click “Options” – “Save Disk”. 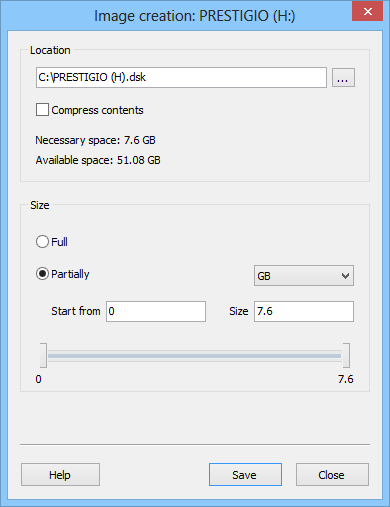 The “Compress contents” option is available only on NT-based operating systems (NT / 2000 / XP / 2003 / Vista / 2008 Server / 7 / 8). The contents of the resulting image will be compressed with the standard Windows LZNT1 algorithm, thus reducing the size of the generated image and saving disk space.

To open a saved disk’s image, click “Options” – “Mount Disk”, or simply drag it from the Windows Explorer to the disks’ list. The mounted image will be added to the list of disks. Now you can work with it just like with an existing disk.

To close an image, select the mounted disk and click “Options” – “Close Disk”.