Accidentally formatted your hard drive? Deleted or modified its file system? Your system says that partition is corrupted and needs formatting?

Recover lost information, repair broken partitions and rebuild damaged file systems in fully automated mode. No matter how badly damaged your disk is and whether you have a file system on it or it’s completely gone, Magic Partition Recovery can carefully recover your files and reconstruct the partition system structures.

Magic Browser Recovery will automatically identify Web browsers ever used on the computer and perform a comprehensive scan of your computer’s file system and disk surface to recover passwords, bookmarks, browsing history and activities in social networks.

Magic RAID Recovery by East Imperial Soft is designed to help users repair many types of corrupted RAID arrays and recover information from single-disk and multiple-disk volumes created in popular DAS and NAS devices as well as a wide range of RAID controllers manufactured by HP, Dell, Adaptec, IBM, Intel, Fujitsu, Silicon Image, LSI, ASMedia, Broadcom, and many others. 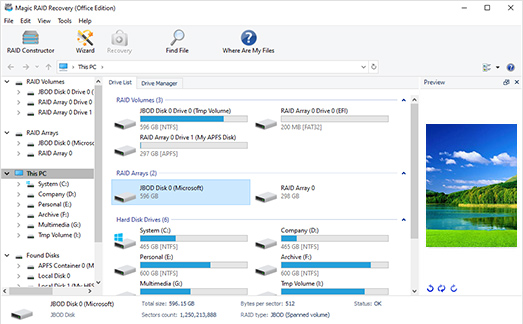 Synology, QNAP, ASUSTOR, Western Digital, Thecus, TerraMaster, Buffalo and many other Network Attached Storage (NAS) devices are readily available. However, the limited system resources and restrictive user interfaces of many pre-build NAS solutions may render the data inaccessible should one of the hard drives in multiple-disk volumes fail even for redundant arrays. Magic RAID Recovery makes it possible to save your files and folders by connecting the remaining disks directly to your computer and extracting the data without the lengthy and unreliable rebuilding/resilvering. 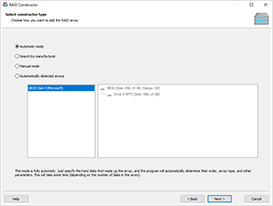 A NAS device is not always about RAID or disk volumes spanned across multiple hard drives. Sometimes it’s just a single disk or a JBOD array formatted in a file system not recognized by your computer. Magic RAID Recovery can help you extract your files and folders by automatically detecting the type of the file system and making the data accessible on your Windows PC. All major file systems used in Windows (NTFS, ReFS, FAT, exFAT), macOS (APFS, HFS+), Linux (Ext2/3/4, XFS, ReiserFS), and Unix (UFS 1/2) are supported.

All Types of Single-Disk and Multi-Disk Volumes 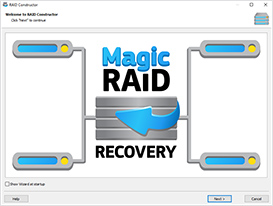 Depending on the type of the RAID array, it may tolerate one or more faulty hard drives. However, it is common for parity-based arrays to have another disk fail when recovering from a single-disk failure. You can reduce the possibility of the second failure by using Magic RAID Recovery to quickly recover the data instead of performing the full resilvering. If the second disk had already failed, Magic RAID Recovery will apply complex algorithms to attempt recovering the files that are still accessible on the remaining disks. Needless to say that Magic RAID Recovery will recover 100% of the data if the remaining disks were enough for complete recovery.

While many controllers advertise support for the various RAID levels, the devil is in the detail. Manufacturers of the different RAID controllers have their own preferences on how to configure non-essential parameters of the array. As a result, one cannot make assumptions about the stripe size or parity. Magic RAID Recovery supports a wide range of RAID controllers including those built into Intel-based motherboards, as well as those manufactured by HP, Dell, Adaptec and many others, including server models.

From time to time, a NAS device or RAID controller may throw the disk out for various reasons, immediately putting the array into degraded state. In certain cases, re-adding the disk only leads to the same problem repeated after many hours of resilvering. The disk may be perfectly readable outside the enclosure with longer than expected timeouts (which is often the case for SMR drives), or there might be just a few bad blocks not affecting the majority of the data. Magic RAID Recovery allows remounting such arrays and extracting the data without the lengthy synchronization. 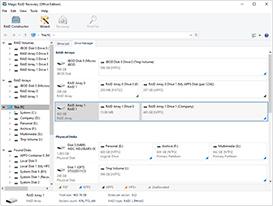 A perfectly healthy RAID might be unreadable because of corrupted file system structures. Rebuilding or resilvering such arrays would be a waste of time, while inaccessible volumes can be repaired by reconstructing their file system structures. Magic RAID Recovery can check the volume and safely extract the original files and folders. 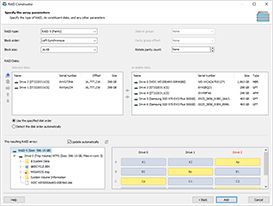 Fully automated performance has its benefits, but it has its drawbacks. If you are an advanced user and know your RAID, or if you work in a data recovery lab, you may achieve a higher recovery rate by manually specifying the correct RAID parameters. Should you know only some characteristics of the RAID array, Magic RAID Recovery will help identify the remaining parameters automatically.

Supports all types of RAID arrays including Windows Storage Spaces

In addition to “classic” arrays, Magic RAID Recovery has been tested on various software arrays including the popular Windows Storage Spaces, a feature allowing to combine multiple hard drives into a single virtual volume. Storage Spaces work similar to RAID arrays, yet they are implemented entirely on a software level. Storage Spaces can replace a RAID 1 by mirroring data across multiple drives for redundancy, or a RAID 1 by combining several physical drives into a single storage pool. Magic RAID Recovery recognizes all types of Windows software arrays.

Recovers information from degraded arrays from all types of RAID controllers

While “R” in “RAID” stands for “Redundant”, redundancy does not mean your storage pool is immune to failures. A failed RAID controller will throw a redundant array out of sync even if the physical hard drives are in perfect order, or if the number of failed hard drives allows for the complete recovery. Rebuilding or resilvering a degraded array in a typical NAS device may take multiple days, all while putting your data at risk by stressing the remaining hard drives and increasing the risk of subsequent failure.

Magic RAID Recovery allows recovering information and copying your data off such arrays without waiting for the lengthy synchronization to complete. The tool supports RAID arrays built by all popular RAID controllers including those built into Intel-based motherboards, as well as those manufactured by HP, Dell, Adaptec and others, including server models. Software-based arrays created in Windows (Storage Spaces), Linux (mdadm, LVM), and macOS (RAID Assistant) are also supported.

You don’t have to be a seasoned system administrator to use Magic RAID Recovery. The tool automatically detects the essential parameters of the RAID array including the manufacturer and type of the RAID controller, the RAID level, stripe size and other things that are required to mount the volume. More often than not, by the time you see the main window, the RAID array you are about to recover will be already mounted and ready for extraction.

If full-auto mode is not your cup of tea, you are welcome to use the advanced manual mode. In manual mode, you can specify all or some parameters of the RAID array. Even then, you won’t have to go deeper in the detail than you want to: should you omit some parts of the configuration data, and Magic RAID Recovery will detect them automatically to fill them in.

A RAID 5 array can lose a single disk and still retain 100% of the data, while a RAID 6 can lose any two. A composite array may tolerate the loss of multiple drives depending on configuration. Resilvering a parity-based array stresses the remaining hard drives, thus dramatically increasing the chance of a subsequent failure. If one more disk fails, you won’t be able to read any data by using the RAID controller or NAS device.

Magic RAID Recovery is designed to squeeze everything down to the last bit out of parity-based arrays. The tool dynamically calculates parity using your computer’s powerful CPU to restore those files that can still be recovered. Even if more than the supported number of disks are missing from the array, Magic RAID Recovery may still recover some of the data by extracting all available parity stripes and using complex algorithms to rebuild the original data.

Supports all Windows, Linux and macOS file systems including raw

Even if you are able to reconstruct a storage pool out of a multiple disks, you still have the logical volume(s) to deal with. A Linux file system won’t be recognized in Windows, and vice versa. If you are using a Windows PC, and your NAS system is running Linux, you’ll need a special tool to mount the file system and see the files on your computer. Magic RAID Recovery will do that automatically by detecting the type of the file system and making the files and folders accessible on your Windows PC. The tool recognizes all major file systems used in Windows (NTFS, ReFS, FAT, exFAT), macOS (APFS, HFS+), Linux (Ext2/3/4, XFS, ReiserFS), and Unix (UFS 1/2).

What if there is no recognizable file system on the disk, or what if the file system is corrupted beyond repair? If this is the case, Magic RAID Recovery will employ the deep scan technique in an attempt to recover files in known formats. The tool will find images, videos, documents and archives in multiple formats by matching information from the disks against a built-in database containing characteristic signatures of known file types. If a file of a known type is recognized, Magic RAID Recovery will scan its header and calculate its exact size and location on the volume.

What
others are
saying

A failed firmware update bricked my Qnap NAS. Support didn’t help reviving the unit, so I used Magic RAID Recovery that helped me save my data to the newer and bigger replacement disk. Nicky Walker

I had four 3TB Seagate drives in a RAID 5. One of the drives died. I didn’t want to risk my data by letting the RAID rebuild, and used Magic RAID Recovery to copy the files over to a single 10TB external. Rupert James

After my old four-bay NAS box had failed, I had the choice of buying a replacement four-bay box or migrating to dual bays with larger disks. Magic RAID Recovery helped me migrate the data without a fuss. George Barker